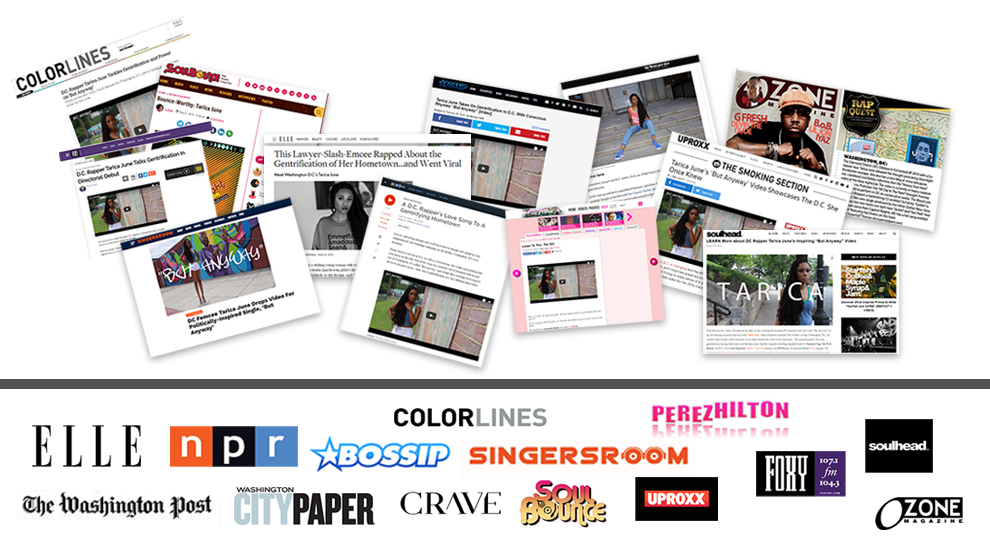 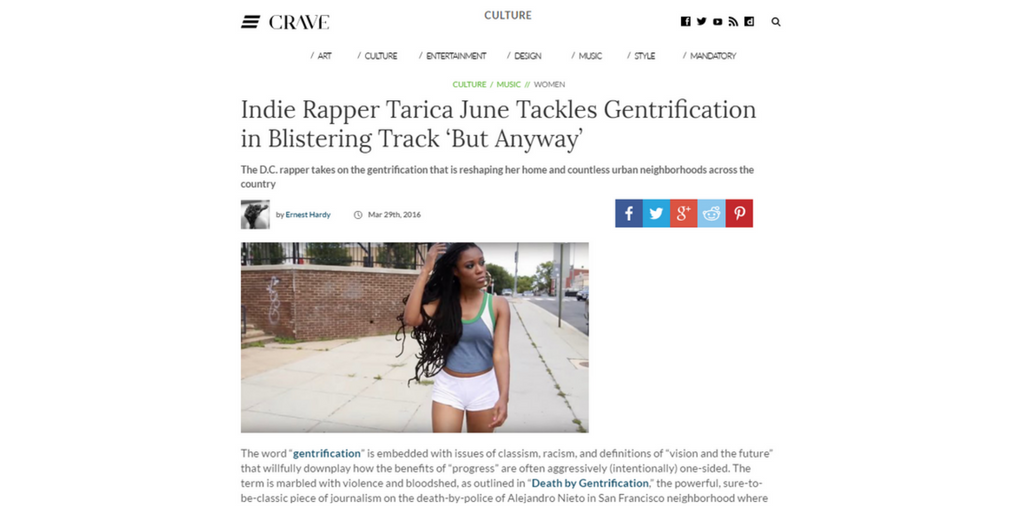 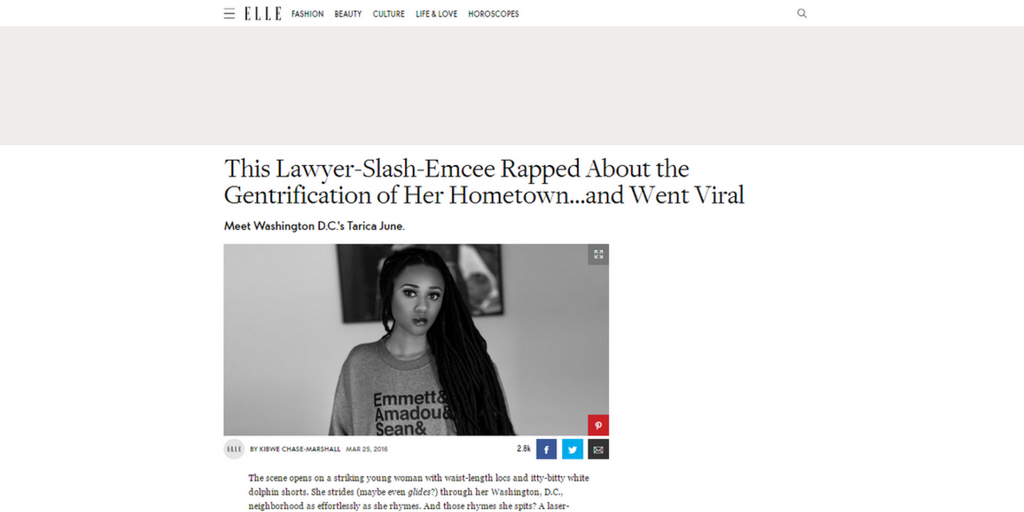 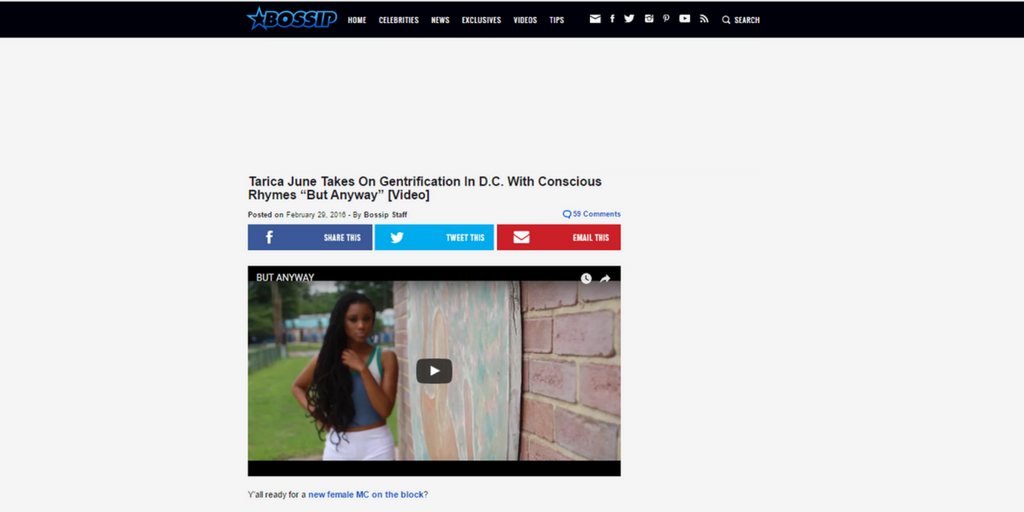 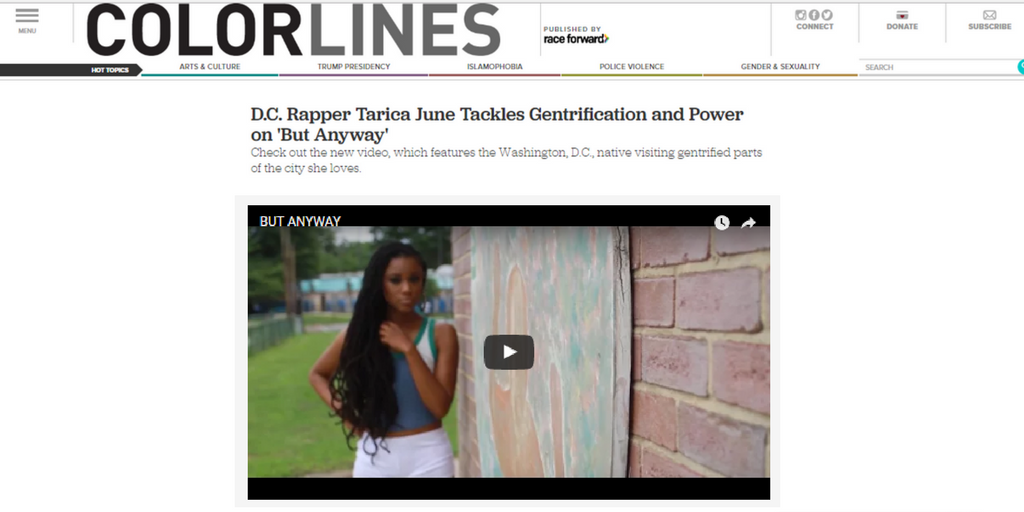 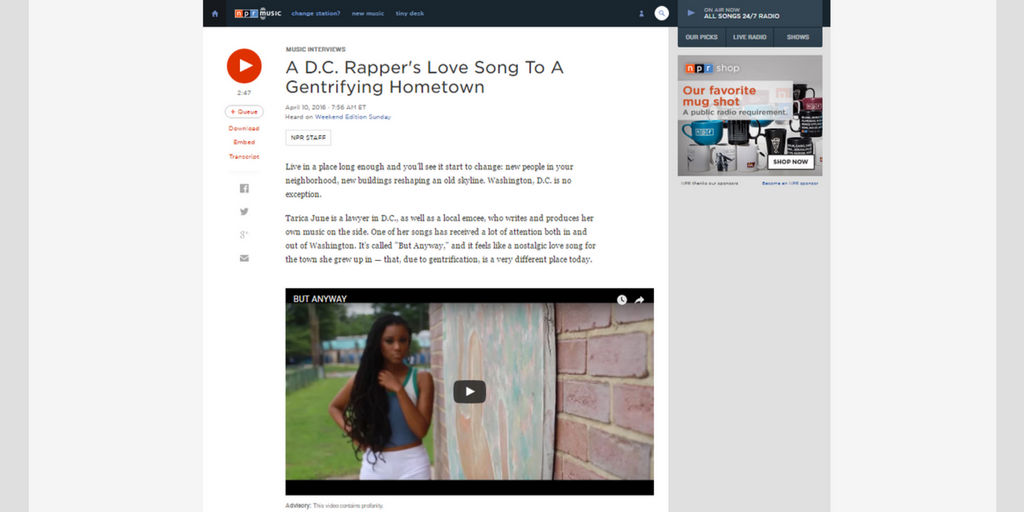 June says she wrote the song just driving around the District one day — and in the video, she surrounds herself with the landmarks of Petworth, the neighborhood where she was raised and still lives. As the music cycles between samples, June expands the focus of her lyrics, from gentrification to the prison industrial complex to racism to corporations.

It’s one of the most endearingly refreshing things about Tarica June: She’s confident about her music, but never cocky about its reception. She repeatedly tells me how grateful she is for each and every view, like, and share that she has received over the last couple of weeks since she posted the video on Facebook (respectively, 1.9 million, 28,000, and more than 34,000 at press time).

ELLE.COM — This Lawyer Slash Emcee Rapped About the Gentrification of Her Hometown and Went Viral
http://www.elle.com/culture/music/a35112/when-shes-not-lawyering-tarica-june-is-churning-out-viral-hits-about-gentrification/

The D.C. rapper is giving us a major bop with her song But Anyway, which showcases not just her great flow but also her lyrical abilities. This song is pleasing on the ears and has SUBSTANCE!

Tarica June, an indie rapper who is a third-generation resident of D.C. (and who holds a law degree from Howard University,) recently became a darling of the internet by giving voice to those on the bleak side of the forward march. She does it in a video that is decidedly old-school – just her strolling casually through her neighborhood while giving shout outs to people and things she loves about D.C., once nicknamed the Chocolate City, so large was its black community.

CRAVEONLINE.COM – Indie Rapper Tarica June Tackles Gentrification in Blistering Track ‘But Anyway’
The D.C. rapper takes on the gentrification that is reshaping her home and countless urban neighborhoods across the country
http://www.craveonline.com/music/971127-indie-rapper-tarica-june-tackles-gentrification-blistering-track-anyway

Over the past few weeks, the internet has been on fire watching the amazing 90’s inspired track and video “But Anyway” by up and coming conscious hip-hop artist, Tarica June.  Since Soulhead’s founder, Ron Worthy, is from Washington, D.C., he couldn’t help but get a little homesick as our staff watched the video to the dope track.  The song eloquently discusses gentrification among other topics.

But Anyway” cleverly illustrates the pangs of a city in deep socioeconomic flux. The video, Tarica June’s directorial debut, is a colorful and celebratory collage of shots on the streets of her hometown that serves a dual purpose.

Even as she laments the changes happening in her hometown, she still manages to strike a hopeful tone. June is determined to carve out a space of her own in the city, and she’s not going anywhere.

UPROXX – Tarica June’s ‘But Anyway’ Video Showcases The D.C. She Once Knew
http://uproxx.com/smokingsection/tarica-june-but-anyway-new-video/

Y’all ready for a new female emcee on the block?

Posing in landmark locations throughout the city, June gives her honest thoughts, authenticity.

Moonlight Revolution: The Mixtape is, in my opinion, one of the most important projects in recent Hip Hop memory and I encourage you to engage it for yourself.

Tarica June, young, fresh and talented DC sista that you are, you have a fan in me.

Remember when female emcees had place in hip-hop? Remember when people like MC Lyte, Queen Latifah and various others could spit verses to make you think … Meet Tarica June.

Word On The Streets Mag
http://wordonthestreetsmag.com/tarica-june-moonlight-revolution-the-mixtape/#more-3356

Really nice to get some new music from a female emcee that I can actually enjoy.

Really glad we came across this female spitter.

When i first heard her i was already sold on her soon as she dropped the first bar. She is very influential and has a lot of substance unlike most upcoming artists these days.

With the lyrical flow of a poet and the gritiness of an MC, Tarica June can most definitely hold a crown. This DC, artist is catching the eyes of many. For all the right reasons…

Part Dead Prez/RBG mixed with the sensibilities of a woman growing into her own in this crazy world, I really enjoyed her topic material. Not only that but she can rap too…